Plight of the Homeless Words

To hear what words say in the ear of the beholder
inspires an ongoing dialogue with something
tied to the existence of beginnings.
I posed as the homeless derelict once:
shouting epithets into the ears of passers-by
who refused my panhandling entreaties
with a deafness of the damned,

Hearing no melodies or worthy sermon
from lips of a ruddy transient
loose on the streets of Vegas where
he tried to disembowel time,
to burst forth sounds of disenthralled agony
as mothers & children, unaware, shuttled by
on their snacking-or-sipping ways.

In tourist fashion they abhorred my intrusions
of a brutalizing, verbal onslaught,
disdaining my ranting denunciations
dissolving into mere word-puddles only
a stray dog licked curiously, barking finally
at the vicious vowels its fangs lacerated
into silence.

No more is solace a mind game
for those who feel they truly feel
at the expense of others,
the way some would share grief being
trapped inside the collodion photos of Sally Mann.
With no exit from the Southern climate
the photographer sees & captures a revenant eyeful
of textures from an irrefutable history
that is past & present images of the earth,
giving way to a hallowed landscape
of eternity within the everyday fact
of an almost unbearable mundaneness.
I was pinioned inside her picture of reality
more real than any vision could possibly perceive,
watching the eyes of a dreamer torn out
so that fantasy was something only the mad saw
creeping from the mourning dove’s dying spirit.
There remains a photo of time itself caught
in the spirit trap of our orb’s desire,
what flashes slowly across the dawn’s horizon
when you ultimately see something akin
to an emotion of awe crystalized,
for the first time, in a vision no one’s tears
can keep you from ever seeing again.

Not the One, But Still

You are not the one who brings me grief
but the smallest figment instead
my blinking eye sees as the mote’s revenge:
or the insect on the lip of time
reminding me of its evanescence.

Or that bend of the road convincing me
there’s no direction home if I’m lost
to the destination my nature takes
(& my nature, what is it?) for
any real human being, tragic or good,

in its perverse seasons of becoming:
how each death of springtime rattles
when winter eventually approaches to
singe with frozen heat a missing summer,
& the glitter of something gone

to become my realness, my other grief.
You are not the one: but still
Jigsaw gnaws at my baring leg
with his saw’s artful blade,
cutting me from the puzzle. 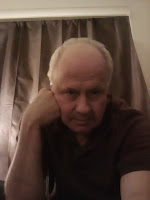 BIO: --Peter Magliocco writes from Las Vegas, Nevada, where he’s been active in the small press for several years as editor, writer, and artist. He has poetry in The Literary Yard, The Pangolin Review, Midnight Lane Boutique, Ariel Chart, Pulp Poets Press, and has been nominated several times for the Pushcart Prize and Best of the Net.