We're in the middle of the
ocean, on a moonless night
no island in sight, tossed by the
tourmaline waves, battered by the
ill-tempered wind, how can our sail be saved?
It's so torn, and the boat appears to have
sprung a leak, and neither of us have the
will to speak, the scent of destination
only travels quite so far, my vision isn't
clear enough to see the brightest
star, the osprey and the seagull
are nowhere to be found, the
serenade of killer whales is
the most uplifting sound. With all
the strength we still have left, we
push upon the prow, wordlessly
questioning,
"Where do we go, now?" 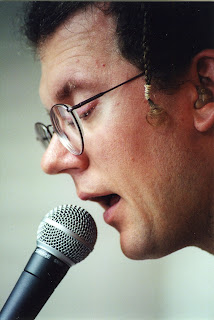 BIO:
Lee Todd Lacks seeks to blur the distinctions between rants, chants, anecdotes, and anthems.  His experience of living with significant vision and hearing deficits often informs his writing and artwork, which have appeared in The Monarch Review, The Quarterday Review, Crack The Spine Anthology, Vine Leaves Literary Journal, Bop Dead City, Liquid Imagination, and elsewhere.  In May of 2017, Lee Todd presented selections of his poetry at Stanford University’s Center for Computer Research in Music and Acoustics (CCRMA) in collaboration with a group of multimedia artists from the United States and Romania.  In August of 2018, HellBound Books Publishing released his second book, entitled Nothing Between Friends.
Posted by tissy at 3:21 PM